From CMASWIKI
Jump to: navigation, search

Lightning is the largest source of oxidized nitrogen in the upper troposphere. During the summer of 2004, nitrogen oxide (NO) produced from lightning over the US was equivalent to 25% of the anthropogenic NOx emissions. CMAQ supports production of NO from lightning with four different options. 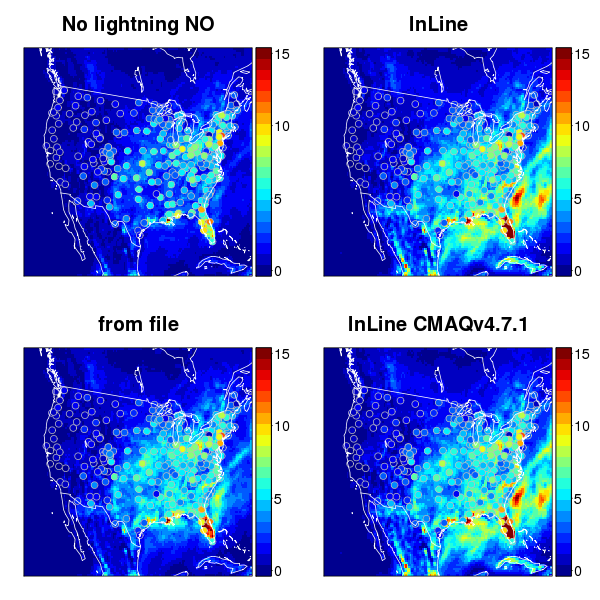 no lightning NOx
CMAQ will not generate NO from lightning. Set CTM_LTNG_NO = N or unsetenv CTM_LTNG_NO

lightning NOx from a 4-D file
This option reads in NO defined as a rate of production (moles / sec) for each model layer at each timestep. Set CTM_LTNG_NO = Y and set LTNGNO to the file that contains these data.

lightning NOx derived strictly from the convective precipitation rate
This option calculates the number of lightning flashes using the convective precipitation calculated in the meteorology model and provided in the MCIP files. Each flash produces 500 moles of NO, which are distributed vertically based on the MCIP calculated cloud top. Set CTM_LTNG_NO = Y and set LTNGNO to "inline". Recommended for hemi-spheric scale simulations when no better information is available.

This option is recommended for all simulations of nitrogen deposition at less than 50km horizontal resolution. There are several utility programs that can be used to translate US National Lightning Detection Network Data to construct the parameter file.

diagnostics (not available in this release)
To generate a output file that contains the lightning NOx produced during the CMAQ simulation, set LTNGDIAG to the desired output filename.

To develop a lightning NOx parameters file, you will need

You can download a series of utility scripts that are available to project the lightning strike data onto your model grid. These require a fortran compiler, ioapi, netcdf, and The R Project for Statistical Computing. The steps in this process are to first generate gridded mean lightning strike density data and then use that data to develop the CMAQ lightning NO parameters file.

Second, monthly mean strike density data has already been calculated at a 12km spatial resolution across the continental US. These monthly files are available for download. These data may need to be reprojected to your model domain and grid specification.

Use the script run.LTNG_2D.sh to generate the parameter file.

The steps in run.LTNG_2D.sh are

To check if your setup is working correctly, the scripts point to sample data. You can compare you results found in the output and R-output directories to the files in the verify directory.

To use these lightning parameters data to generate lightning NO in a CMAQ simulation, in the CMAQ run script, set LTNGPARM_FILE to the output from run.LTNG_2D.sh.

How to edit Wiki pages